Frankly it is not easy to review a piece that everyone in London is counting on to save the West End.

After „The Beautiful Game“ collapsed after a short run of 11 months three years ago quite many people hoped Andrew Lloyd Webber would create a piece for the masses again that would be political correct and entertaining.

After the premier on 15th September the usually not too prim English critics did not mince one’s words. Except for a few praising words, there were many negative remarks on the musical stage version of Wilkie Collins mysterious story about Anne Catherick alias The Woman in White. The Daily Telegraph wrote about a „sharp disappointment“, the Evening Standard would like to store the piece in a museum immediately because it is „so old-fashioned and boring“. Even the venerable Times finds „The Woman in White“ „too pale and ponderous to be exciting.“ 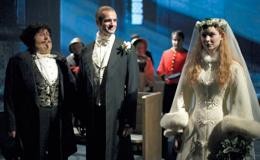 In the English area, the tragic story of The Woman in White is well known. That might be one of the reasons why there is no contents summary in the program.

However, for musical guests from abroad the material is rather unknown. The action begins with Walther Cartright (Martin Crewes) encountering The Woman in White (Angela Christian), whom he rescues from her tormentors. Looking for a job he meets the selfish and unpleasant Mr. Fairlie (Edward Petherbridge), who hires him as an art teacher for both his nieces Laura Fairlie (Jill Paice) and Marian Halcombe (Maria Friedman). Walter falls in love with shy Laura, who strongly resembles the mysterious Woman in White. Yet Laura is already promised to marry nasty Sir Percival Glyde (Oliver Darley), whose only reason to marry the young woman is her wealth as heiress of paternal Limmeridge House.

In order to preserve Laura from a large mistake, The Woman in White shows her real face as Anne Catherick to the younger sister, but her advice is struck into the wind. Only little time later Marian realizes how dangerous this wedding will become for her younger half sister and tries her best to rescue her. Therefore she needs the aid of The Woman in White and in addition to hers she asks spurned Walter and one of Sir Percivals best friends, Count Fosco (Michael Crawford), to help her. Finally a long concealed family secret helps to clarify a cruel crime.

Impressing, new and original – but absolutely not theatre-like – is William Dudley’s video-design, who also put Germany “Dance of the Vampires” into set. All backgrounds develop from video projection on three mobile (convex or concave) screens and produce deceptively real landscapes, palace fronts or streets. This way the cemetery, forest and mansion seem to become more authentic. The interior subordinates itself from the superior backgrounds by Spartan means. A chair and table are sufficient to symbolize a living room, add a bed and you get a sleeping room. Three scenes remain in mind above all: 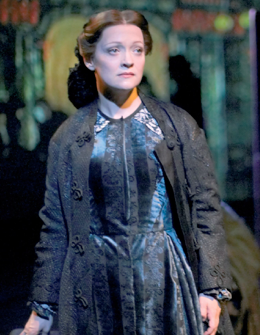 The reason why the set design is described here in such detail simple: Apart from the musical stars Maria Friedman and Michael Crawford the set is the only thing, that stays in mind from „The Woman in White“. Neither Lloyd Webbers composition nor David Zippels lyrics and dialogues lead to enthusiasm. It is no real surprise that there where no standing ovations only four weeks after the première.

The performance of the 28 actors is good and one can hardly find anything to criticize. However, besides the two prominently announced musical stars no one really attracts attention. The sad thing is that the piece gathers no depths and tends to lengths, mostly because of the faultless singing and smooth acting without any corners and edges. It lacks the accents that should come from the cast, although the seven leading actors have sufficient opportunities. But neither Martin Crewes (alias Walter Hartright) nor Jill Paice (as Laura Fairlie) use the chance to place their duet „I Believe My Heart“ as show stopper. Also Angela Christian, who came over from the USA for the title roll of Anne Catherick, sets no highlights. 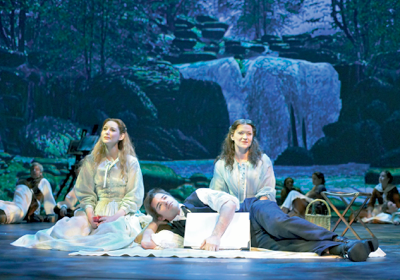 Do not get me wrong: Everyone acts and sings good, but just not exceptionally. They fail to take and win public. Luckily there are two experienced colleagues. Maria Friedman and Michael Crawford guarantee excellent singing and an excellent acting. The older half sister of Laura, Marian Halcombe is played by Maria Friedman. Her huge solo „All for Laura“ at the end of the first act causes deep emotions for the first time on that evening. With much devotion and sense Maria Friedman proves her professionalism. She keeps the high level of pf playing a strong woman with heart, for which she received an Olivier Award last spring for her lead role in “Ragtime”.

Michael Crawford returns to the origin of his unique career as the vain Count Fosco. The first Phantom ever obviously copes perfectly well with the Broadway-Flop of „Dance of the Vampires“. Although he is stuck into a de-formed foam-material costume and has hardly any complete solo he shows his extraordinary class with his acting and stage presence. Whenever he enters the stage people stop breathing. With his large scene in act two he makes all 1,800 guests in the Palace Theatre laugh by viewing his performance as a love-stricken, vain count. He plays with the rats and mice as if this is the most usual thing in the world – really magnificent. 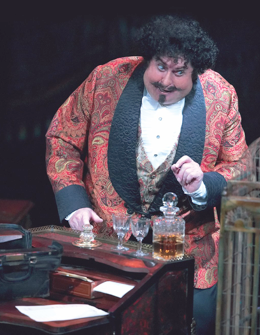 Yet apart from these two exceptional artists and the new set-design „The Woman in White“ does not meet the expectations. The music of Andrew Lloyd Webber splashes very shallow here. In contrast to „The Beautiful Game“ you do not hear so many familiar sounds from „Cats“, „Starlight Express“ or „Jesus Christian Superstar“, but without any recourse on previous productions it does not work this time. And so you find quite frequent stylistic similarities from „Evita“ or „Whistle Down The Wind“. That pre-published single „I believe my Heart“ is very nice as a pop version yet not really impressing, but on stage it works quite soberly and leaves people impassive and untouched.

Also the production work of Trevor Nunn provides regrettable recourses. Some scenes are absolutely identical to „Les Misérables“. Certainly it is not simple to invent again and again the wheel newly for every new musical, but just because „The Woman in White“ is also set in a gloomy time and has a tragic subject, you mustn’t place the actors along the old stage marks of „LesMis“, what was to be seen until spring 2004 at the same theatre.

If you judge the piece by Germany measures you have to condemn it to fail: the story is too dark, the music is hardly vibrant and without any hit potential, there are not opulent costumes or magnificent sceneries. But the English judge a musical by other criteria and so the hope remains that it ticket sale extension does not end with September 2005.