Michaela Flint: The most obvious question is: Why are you here, a guest singer at „Buddy Holly Reloaded“ at Hamburg’s lovely Imperial Theatre?

Earl Carpenter: I don’t know why, but I have such an affinity with Germany. I always wanted to visit Germany. I had the opportunity to tour Germany, Austria and Switzerland with the BB Production of „Evita“, playing Perón. And I just fell in love with the country.

I have this fascination with the German language as well. When I was a young boy I used to live in Saudia Arabia and there are similarities between both languages and I just love listening to them.

I know Hauke Wendt and his wife Jacqui for more than 15 years and when they called me about 3-4 weeks ago – I was still playing „Les Misérables“ in Toronto – I couldn’t do anything else than saying „Yes!“. They told me they would ask Drew Sarich, too – and I haven’t seen Drew since 2008 when we both did Les Mis in London. So this was an additional reason for me to join the band of „Buddy Holly“ tonight.
And now are we here – in this former sex cinema and I love it!

Earl Carpenter: I think it transmits everywhere, whether it’s here in Germany or further afield. The guys are good musicians, you have a good banter and people love their energy and enjoyment. I think there are not enough of such shows. It’s so much fun!

That’s why people go to the theatre. For the British population theatre was always a place you went to in times of crisis seeking for distraction and escape of realism. Theatre sometimes takes itself a little too seriously and I think it sometimes forgets who the audiences are. And this „Buddy Holly reloaded“ is just a sonification of that!“

Michaela Flint: You have been playing Javert in „Les Misérables“ and the title role in „Phantom of the Opera“. Can you explain the magic of these shows – as different as they are?

Earl Carpenter: If I knew what the magic was, I would be a millionaire! I think it’s their great, incredible stories. „Phantom of the Opera“ is the classical „Beauty and the Beast“-story. At „Les Misérables“ everyone identifies with every single character. The show is like a Shakespearean play, you have your protagonists and everyone soliloquises and thus the audience easily gets the structure.

At the original productions you had black boxes and all you got is the actor and bits of background and scenery. So the whole storytelling depends on the actor. I think that’s what makes them special: They don’t give away too much information, the audience have to use their imagination to complete the picture. That’s why these two shows have lastet nearly 30 years.

Michaela Flint: You played nearly all major roles in musical theatre. Do you like one in particular?

Earl Carpenter: They are all special. They all meant something particlar to me at that point of my life. I am in this business for nearly 20 years now and I cannot say that there is one particular show I liked most – they all have been amazing.

Michaela Flint: My standard question in this context would be: Is there a role you dream of playing?

Earl Carpenter: At the moment I am in a sort of transition period. I have been lucky enough to play all the big major roles in musical theatre and I don’t really know what my next part will be.

Going to Toronto, coming to Hamburg – both shows me that there are a lot of opportunities outside the UK, away from the West End. That is very interesting. Recently I realize that there are more things. For example, I always wanted to be involved in „Tanz der Vampire“ and play Graf von Krolock.

Michaela Flint: They tried to put a modified version of that musical on Broadway a couple of years ago…

Earl Carpenter: Yes, but it was a completely different show. It should have been as it was here in Germany and Vienna: dark, sexy, comedic when it has to be, but not changed completely to please everybody abroad.

Michaela Flint: So, Germany would be a market you would like to work one day?

Earl Carpenter: Oh yes. And I would be glad to face the challenge of learning proper Germany for the stage. As I mentioned, I love the language.

Michaela Flint: Which show at the West End would you recommend at the moment?

Earl Carpenter: I have absolutely no idea. I haven’t been in London for months. I don’t even know what’s playing. Even if I was there I would have been on stage myself and wouldn’t have had the chance to watch any show, which I really miss.

But I prefer touring anyway. I love this feeling of gigging to get your audience. For me it’s more beneficial to play at lots of different venues around the country than staying in London all the time. You get seen by more people, you get press and media attention at every venue. I always had the mentality to stay on the road.

Michaela Flint: Speaking of touring: People are waiting for „The Three Phantoms“ to be back on track. Will that happen soon?

Earl Carpenter: There are a lot of discussions… But nothing’s decided yet.

Michaela Flint: Thank you very much for your time. I am really curious on which stage I will see you in the future. 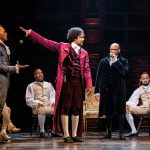 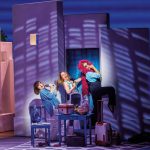 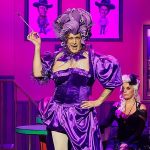 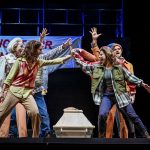